Have you ever experienced periods where you just can’t seem to concentrate? Maybe you’ve experienced times where you’re stressed to the point that you can’t even relax or sleep?

Most people experience brain fog at some point in their lives. It’s nothing serious but it does prevent you from performing tasks at your best.

Losing mental clarity can be due to several causes such as constant stress, lack of sleep, improper diet, or inflammation. Once in this state, it’s common to feel distracted, anxious, or mentally overwhelmed.

Take Back Your Mental Clarity

You can’t talk about herbs for mental clarity without talking about good old Ginkgo. This traditional Chinese herb is commonly used to help elderly people deal with dementia or confusion.

Although Ginkgo nuts have long been used in Chinese cooking, it’s the leaves that we’re interested in. The leaves of a Ginkgo Biloba tree (also known as the maidenhair tree) increases circulation to your peripheral nerves which lets your brain access more fresh blood. It also stimulates the production of neurotransmitters, thereby, allowing your brain to make better connections.

Altogether, Ginkgo increases mental clarity by improving circulation to your brain, improving your memory and mental processes as a result.

Brahmi (also known as water hyssop) is a creeping herb native to the wetlands of southern and eastern India, Australia, Europe, Asia, as well as North and South America. Brahmi has long been used in Ayurvedic medicine to reduce stress.

The oblong leaves possess a somewhat earthy-citrus scent. Brahmi tea has traditionally been used not only to cure various ailments but also to improve brain function, enhance memory, and reduce cortisol levels. It also contains antioxidants (which is always a plus).

Claims suggest that Brahmi can help those suffering from inflammation, anxiety, stress, high blood pressure, and even ADHD. Brahmi relieves tension in the body and calms the mind. This calming effect may be the reason why Brahmi has often been used to help people meditate.

Rosemary has long been used to control pests and to add flavor to food but did you know that it can also support mental clarity?

Rosemary has gradually gained popularity over the years due to its various health benefits. There seems to be some method to the madness of wearing rosemary around your head as rosemary has been claimed to help you clear your mind and calm you down. Some claim this herb to help improve concentration, mental fatigue, depression, and forgetfulness.

Known as “the herb of remembrance” for centuries, this humble herb has long been closely linked to cognitive function. People used to wear rosemary around their heads to help them study and pass exams.

Scientifically, rosemary is a mild parasympathomimetic which helps keep your nervous system in “rest and digest” mode rather than “fight or flight”. This is what helps people make better decisions.

Ashwagandha is another Ayurvedic herb traditionally used to defend the body from the effects of stress.

Also known as Indian ginseng, poison gooseberry, or winter cherry, is related to more common nightshades like tomatoes and eggplants. Don’t let its tomato-like fruits fool you, though, as it’s the roots you should be after. Ashwagandha root powder has long been used in traditional Indian medicine to relieve stress and improve concentration.

According to studies, Ashwagandha reduces blood sugar levels. One study showed that it improved insulin release and insulin sensitivity. This effect can be experienced by both healthy individuals and those with diabetes.

Another study has linked withaferin — a compound in Ashwagandha — with apoptosis and the inhibition of new cancer cells.

Apart from its effect on mental clarity and cancer prevention, this herb can also help treat infertility in men. One study also showed a significant increase in testosterone (the male hormone) in male volunteers.

Rhodiola naturally grows in the northern hemisphere of Europe, Asia, and North America. While it can be propagated as ground cover, this flowering plant has long been used to treat anxiety and depression. You might find that Rhodiola comes in several names like golden root, roseroot, Aaron’s rod, Arctic root, king’s crown, lignum rhodium, and orpin rose.

Like Ashwagandha, Rhodiola is also an adaptogen which improves your body’s resistance to stress and its symptoms (fatigue, exhaustion, and anxiety). For centuries, people in Russia and Scandinavia have used this herb to help them deal with stress in the cold Siberian climate.

This herb has also been linked to improved cognitive function. One study on 56 physicians on night duty showed that Rhodiola decreased mental fatigue and improved performance in work-related tasks by 20%. A similar study on military cadets showed a reduction in mental fatigue, improved sleep, and an increase in motivation to study.

Last, but certainly not least, is Mugwort.

Mugwort has also been found to relieve joint pain and alleviate digestive and intestinal problems. Some studies are also looking if Mugwort has anti-cancer properties.

You can usually find Mugwort dried or in the form of essential oils, tea, seeds, smudge sticks, or powder. Taking in its smoke or drinking its tea is believed to promote lucid dreaming due to the thujone the plant contains.

Traditionally, oat straw, usually in extract form has been used to relieve stress, anxiety, and depression.

While research is limited, some studies suggest that the extract may improve mood by inhibiting the enzyme phosphodiesterase type 4 (PDE4), which is found in immune cells. If you’ve ever taken a nootropic, you likely saw Oat Straw listed as an ingredient.

Some people argue that it is nothing more than a filler ingredient, while others swear it works for mood enhancement and blood flow.

The alkaloids huperzine A and huperzine B were originally isolated from the Chinese club moss. They are known inhibitors of acetylcholinesterase, and especially huperzine A shows pharmaceutical potential for the treatment of Alzheimer’s disease.

Despite their medicinal importance, the public genomic and transcriptomic resources are very limited and the biosynthesis of HupA is largely unknown. 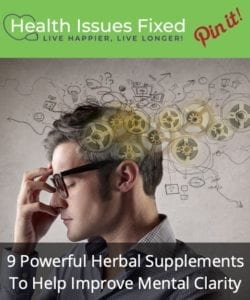 Cat’s claw protects cells against oxidative stress and negated the activation of NF-kappaB. These studies provide a mechanistic evidence for the widely held belief that cat’s claw is an effective anti-inflammatory agent. When systemic inflammation is reduced, blood flow, oxygen and nutrient transport in enhanced; all of which benefit cognition and mental clarity.

If you have questions or feedback, we welcome you to leave a comment below.

4 Areas Of Health That Are Always Overlooked