5 Most Effective Styles Of Superset Workout For Massive Muscle Growth

I’m pretty sure that by now you’ve heard of supersets and you’ve likely seen guys in your gym supersetting many a time… what did you notice about those guys? They were the dudes that were stacked, right? Hell yea they were.

Supersetting is an advanced way to up the intensity of any exercise. A superset is when you perform two exercises back to back with no rest in between.

There’s no shortage on the possible variations of supersets, but for time’s sake, we are going to focus on 5 of the more popular & most effective styles.

Related: What The Heck Is High Intensity Interval Training

5 Most Effective Styles of Supersets

An antagonistic super set is when you exercise opposing muscle groups.

Although they’re opposite muscles, they actually support each muscle during your movements. For example, during dumbbell curls for your biceps, when you lower the dumbbells, your triceps are called into action as well. Similarly for the negative movement of a bench press, your back is working too like when you are doing the bent over row.

Here’s an example of an antagonistic superset on your chest and back day, do a bench press routine then follow up with a bent over row or vice versa.

That will be one superset. Rest for 30-90 seconds and then proceed with the second set and so on. This will work the muscles involved more deeply than just straight sets. 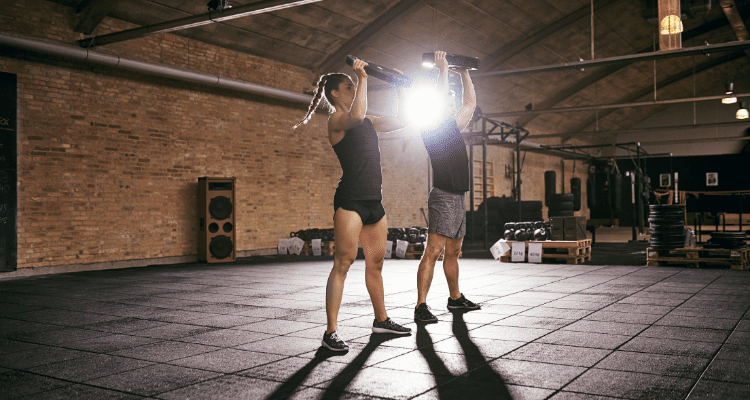 In a pre-exhaustion superset, you work on the same muscle group with an isolation exercise and then follow up with a compound exercise without rest in between sets.

For example, (chest and back day) you work out with dumbbell flys (chest isolation exercise) then immediately thereafter with a bench press (chest compound exercise).

By performing an isolation exercise first (flys), you pre-exhuast the targeted muscles you’re working on, which in this case are your pectorals (pecs) and then hit your pecs hard again with a compound movement (bench press) that allows other muscles that are still fresh such as your deltoids and triceps to assist your pecs in the exercise.

It is the exact reverse of the pre-exhaustion. In other words, lift compound exercise first and then follow up with an isolation exercise for the same muscle group.

It will allow you to lift heavier weight for the compound exercise because your targeted muscle group is not pre-exhausted yet.

For example, you could perform a barbell curl followed by a dumbbell hammer curl to target your biceps.

You get the idea.

In staggering, you do an exercise for a different muscle between sets.

For example, during a straight set of chest presses, you could throw in a set of calf raises or crunches while you rest your chest muscles.

This saves time, allowing you to work smaller muscle groups while the bigger ones are recovering.

Utilize supersets if want to save time, increase intensity, break through plateaus and just plain spice up your workouts.

Remember to switch up your training routine every 4 -8 weeks or so to avoid plateaus.

That’s going to do it for this one, if you found this beneficial, have any questions or just feel like saying what’s up, drop me a line in the comments below.

What are your favorite supersets? Drop us a line in the comments below.