Are your teeth making you sick?

I know, this sounds crazy right? Teeth causing someone to be sick? What is this guy talking about? I understand that it sounds far-fetched, but it definitely needs to be discussed.

The reason I bring this up today is because very few people realize or even understand the underlying dangers regarding what goes on in our mouths. Millions are affected by this, and it most definitely could be causing something that you’re dealing with at the present moment. It’s just another one of those areas regarding health that need a little more exposure. 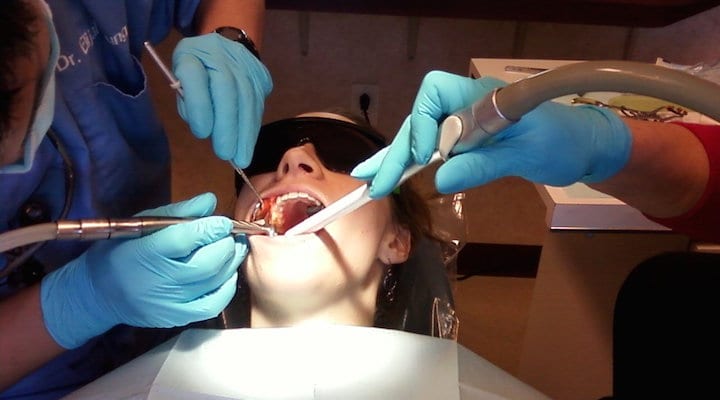 Ohhhh root canals, how awful! Nobody enjoys these dreadful procedures, am I right? The name alone sends chills down my spine. Luckily, I’ve never had to go through with one of these before, and I hope it stays that way.

These so-called “crucial surgeries” are more dangerous than you may realize. What I’m talking about here is the immediate effect that they can have on one’s health. Scientific studies have proven that within 24-48 hours after this deadly (yes deadly) procedure takes place, a bunch of unfavorable things can begin to happen within the body.

But before we get into the details here, let’s take a step back and assess a few things. First off, I want to talk about a man who, in my opinion, is a true revolutionary regarding underground health information – especially when it comes to revealing the dangers involved with dentistry.

Over the past 100 years, it has become evident that these harmful dental procedures are not good on many levels. And the one man that I hold responsible for exposing these dangers goes by the name of Dr. Weston Price.

What Dr. Price discovered back in the early 20th century, was that pathological bacteria, as found in root canals, have the ability to cause some pretty horrible diseases. Price found that these harmful bacteria could become a source of disease within the body soon after this common procedure takes place. His theories contradicted (and still go against) the dental association today. I really don’t think the ADA (American Dental Association) is a fan of Dr. Price’s work.

Need some work done on your tooth?

So you have a tooth that needs to be drilled and filled, right? Or at least that’s what your friends and/or dentists are telling you. As you debate the issue further, you finally decide to go see your dentist again to get another assessment. So you go in and your dentist then tells you that a root canal is needed to eradicate this so-called “problem” that you’re facing. Ohhh boy, here we go!

Let’s see why proceeding forward with this can be a bad move!

If you have had some work down or if you’re in pain, check out this remineralization gel that offers temporary and permanent relief of sensitiveness pain discomforts associated with cavities or dental procedures – also helps strengthen loose teeth and prevents cavities and bleeding gums.

A perfect place for deadly bacteria to live

1000 teeth! Yup, that’s the amount that Dr. Price had assessed to draw up his conclusions. And let me just say that his findings were extremely eye opening on many levels!

Dr. Price had taken one thousand extracted teeth and had then hollowed them out like most dentists usually do before filling the holes. After this process, he then proceeded to sterilize these hollowed out canals with some extremely potent chemicals, ones that are far too toxic for an actual live person. The purpose of this was to attempt in making the canals sterile and free of harmful bacteria.

So as time ticked by, the teeth (yes, all of them) were busted open and assessed. The results were disturbing…

990 teeth, loaded with toxic bacteria even after being “sterilized!” This was a pivotal finding. What this proves it that dentists ARE sealing in very toxic, disease-enabling bacteria into peoples mouths. These harmful organisms then spill into the blood stream and wreck havoc on the body. Once they hit general circulation, it’s a done deal! Mayhem on a deadly level!

Dr. Price had found that bacteria were being housed in the tubule region of the tooth. From this area, bacteria then would travel into what is called the pulp chamber (the region that is sealed off by dentists). The layer of sealant that was used (and still used today) basically locks in these deadly organisms – allowing it to continuously spill into the body. As stated earlier, once it hits the blood stream, any organ can be affected. Nothing is off limits at this point.

I’ve found Dental Herb Company’s DHC-TGP Tooth & Gums Paste to do an admirable job at reducing the amount of ‘bad’ bacteria hiding in your mouth. It is a Truly Natural professional strength toothpaste.

A dead organ in your body

What I’d like to note here is that this procedure leaves behind dead tissue; it’s like leaving a dead organ inside of the body. Think about that for a second, if you had an infected kidney that was making you sick, and you had no other choice but to take it out, would you “seal it off,” or would you remove it?

Although I obviously don’t advocate the removal of organs for unnecessary reasons, I still would want to take out any diseased part of my body if my life was in jeopardy. Wouldn’t you?

Now you see, that’s how one should look at these flawed dental procedures. Dentists are leaving necrotic tissue in the bodies of their patients! That means DEAD flesh that’s decaying and marinating in the mouths of million of people! Do you think that bacteria could possibly be an issue here? I’d say so!

Most dentists are NOT educated on this subject properly

And it’s true! They’re just taught to do them!

What I find crazy is how dentists are taught in school that they can legitimately sterilize these teeth before jamming this wax-like substance into the canal regions, this is so not correct. It’s impossible to completely sterilize these regions of a tooth, simply because the instruments used cannot reach these dirty and very small sections of the body.

Sure, dentists can maybe sterilize sections of it, but noting is 100%. What I’m talking about here is how bacteria are able to wander out of these areas and circulate throughout the body. Because of this, other physical regions can be dangerously impacted. Kidneys, heart, liver, etc…if blood is flowing to it, it’s most definitely at risk! Remember, if it flows, it goes! The entire body can be affected!

The presence of dead or necrotic tissue within the body will cause it to launch an immune response to deal with the problem at hand. The infection that I’m speaking of here is a problem that’s linked up with an autoimmune-type response, which causes the bacteria issue to get worse! Here, let’s look at some of these strains that Dr. Price had found within his studies.

So let me ask you something, do you think that any of these areas are serious enough to talk about? I’d say so. Especially when so many people are suffering from disease on such a huge scale today. Take a look at this rabbit study conducted by Dr. Price.

Warning! This is pretty crazy…

The reason I’m talking about this is because I feel that these dental procedures are discrete sources of infection and disease that very few people are aware of these days. And the worst part about all of this is that dentists are adamant in dishing them out as if they’re healthy and perfectly legitimate.

“Why is it that topics like these are so covered-up most of the time?”

I often wonder why these obviously flawed procedures are so hidden from the general public. You better start to believe that something fishy is going on here. Don’t think for one second that certain monetary factors are not at play here.

I know, I know, I often have the ability to scare you more than is needed, but it’s all for your own good. It’s because I love you all and want nothing but the best for all of my readers!

On top of this already troubling information is the additional subject of mercury fillings: another major area of concern. One thing that has become clear is that metal in the mouth, in NOT good in any amount! And this is solid fact!

Over the years, science has shed light on this subject and has actually tied in the use of these filling with neurological disease on some very scary levels.  And what I find REALLY frightening is how the use of these fillings have been associated with disease since the 1840s! That’s a long line of proof that has somehow slipped under the radar!

So why is this metal so bad?

Put it this way, if an atom of mercury is able to attach to one of your healthy cells (something that happens to a lot of people may I add), your body will identify this newly transformed cell as “foreign” and will dispose of it accordingly.

So, this atom of mercury is able to kill off your good cells by hanging onto them. Sounds kind of dangerous to me, no?

Science also speculates that this exact scenario is what’s causing high incidences of neurological disorders to be so prevalent today. Think about it like this: if this atom of mercury attaches itself to a nerve cell (again, something that is quite common), the body will say, “KILL THAT CELL!” Now, I don’t think you really need me to tell you that the extermination of healthy nerve cells is a bad thing.

If nerve cells are being targeted and eliminated, the development of some type of neurological disease is almost guaranteed. I strongly believe that many of those suffering from conditions like multiple sclerosis, and/or ALS (Lou Gehrig’s disease) could be victim to substances like mercury. And let me just say here, middle-aged people (baby boomers specifically) have a lot of toxic metal in their mouths! This is not good, and can most definitely set a lot of you up for complications in your later years.

Now, I can’t say that this is the sole cause of it all, but I can legitimately state that it’s worth recognizing. I can’t rightfully point fingers at anybody here, so I’ll just leave it up to you so that you can make your own assessments.

So where does this leave you with dental work?

You know, this is a tough question to answer, so I’ll just say that you need to weigh your options accordingly. The truth is that these procedures are harmful, so completely removing a diseased tooth is probably the best option in some cases. Yet, some can actually handle such dangerous procedures with little to almost no complications. Genetics play a huge role in all of this as well. As with a lot of the topics I discuss, some people can just handle harmful substances and/or toxins better than others.

Put it this way, if you have been diagnosed with some form of disease and you have loads of mercury or root canaled teeth in your mouth, I would recommend talking with your dentist about possibly removing these teeth. This is in NO WAY medical advice, just a personal opinion on what you could maybe consider.

There have been many cases of people actually ridding their bodies of life-threatening diseases by addressing their dental work, and this is encouraging evidence.

So in the end, the choice is yours. All I’m here to do is provide you with the information so that you can make smart decisions, and that’s it. My main goals involving topics like these revolve around creating awareness, and clarifying the information that can somewhat confusing.

Before leaving, please check out the research I have provided below – interesting literature to say the least.

Thanks for tuning it!